In the Super Pro ET class, 38 participants will be competing. Most of the island, but also many French, German, Austrians, and a team from Andorra.
At ProET, 41 teams compete. There are 4 participants, Will Clark, Til Schöninger, Janine Hagen and myself. 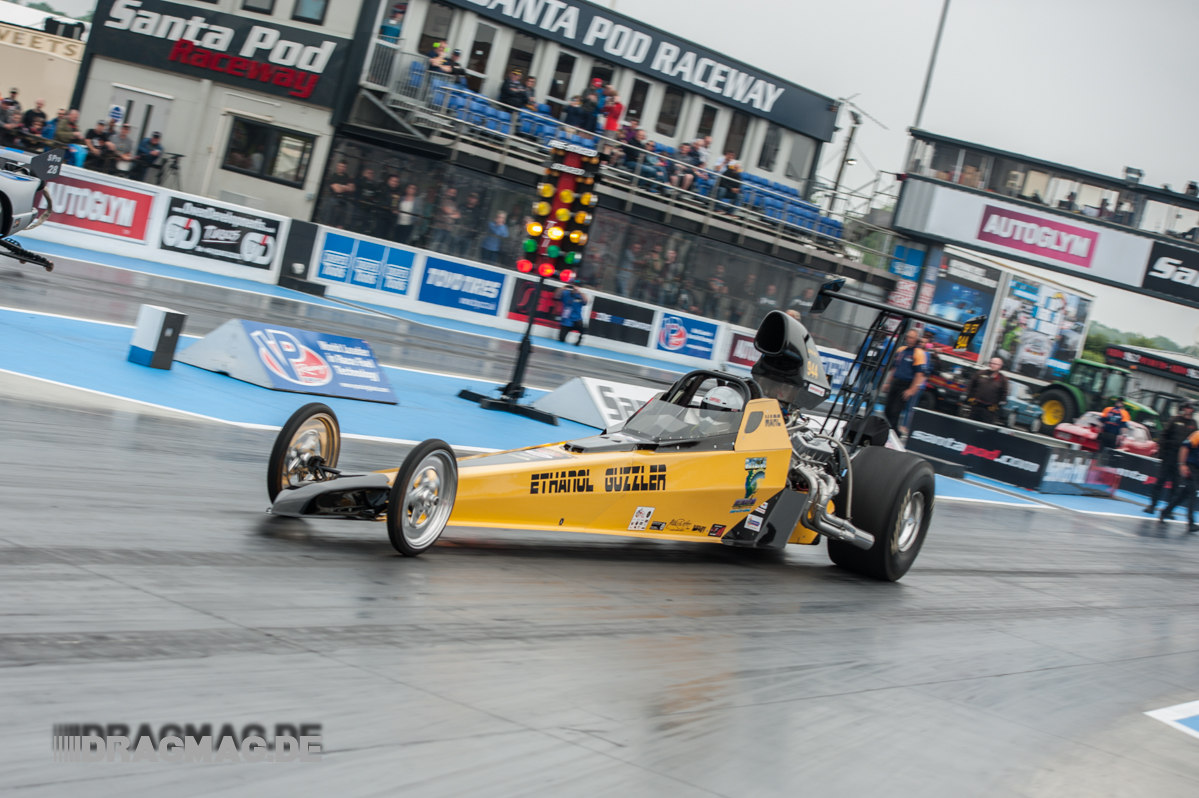 Weather-related (the weather was very well-intentioned) and by Oildowns were from the 9 qualifying "only" 5.
Unfortunately, Eric Angeloni SuProET did not come into the field. He had problems with second gear on Saturday, when they were fixed, there were no more qualifying runs.
Unfortunately, I gave away the last qualifying race because my starter went on strike in the pre-start area, but still managed to finish 5th in the qualification with 0.0043 sec. hold over index.
Thanks to Til Schoeninger for the starter, who accompanied me at least in the first elimination round.

On Sunday it went into the race day:

ProET
The participants were all qualified for the 32er elimination.
Til Schöninger, Will Clark and I had to give KO already in the first round.
Only Janine Hagen made it against Will Clark in the second round.

In the second lap, Janine had to compete in his Mercedes against Neil Watkins in his Dodge pickup and won the race. 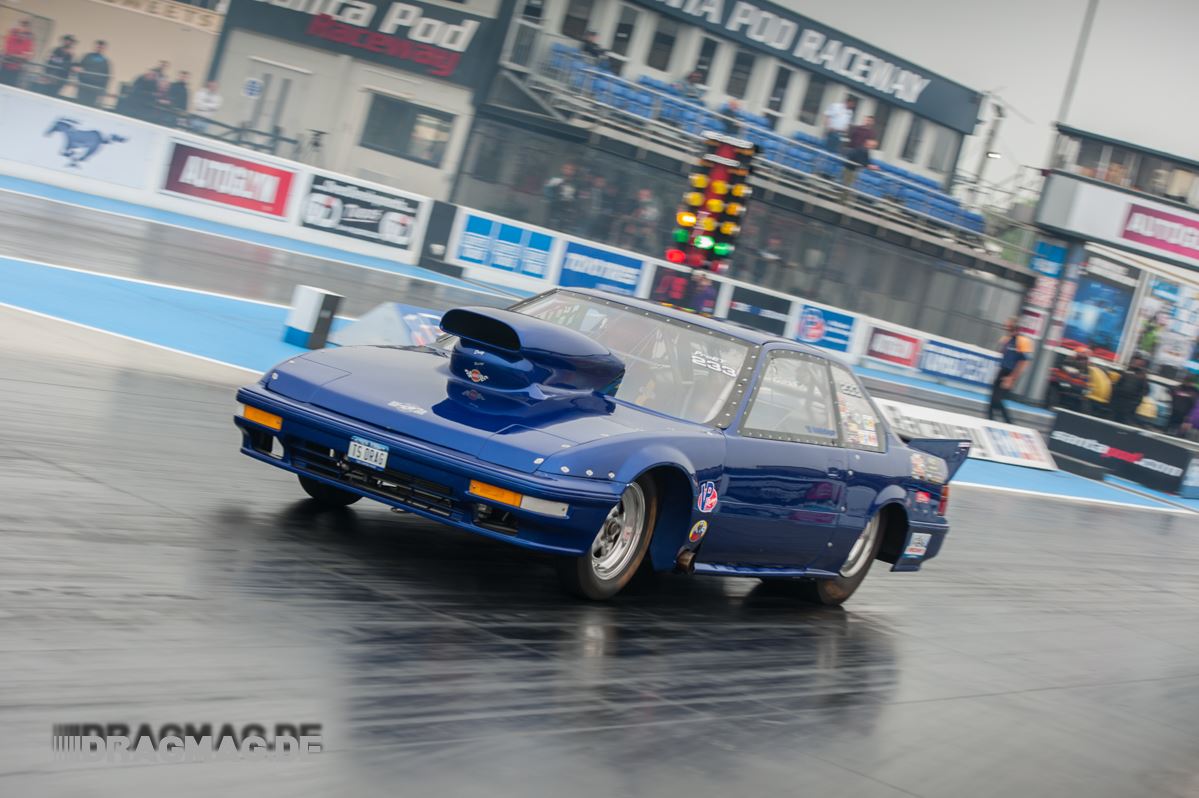 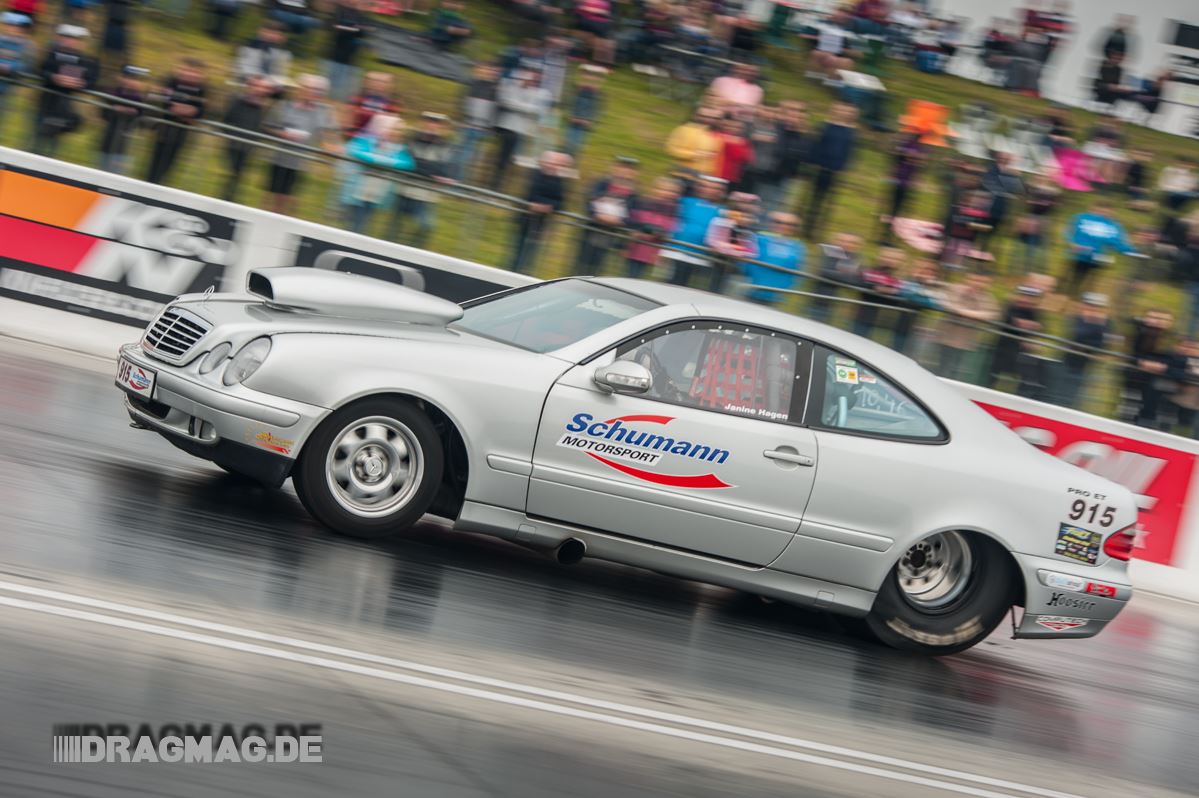 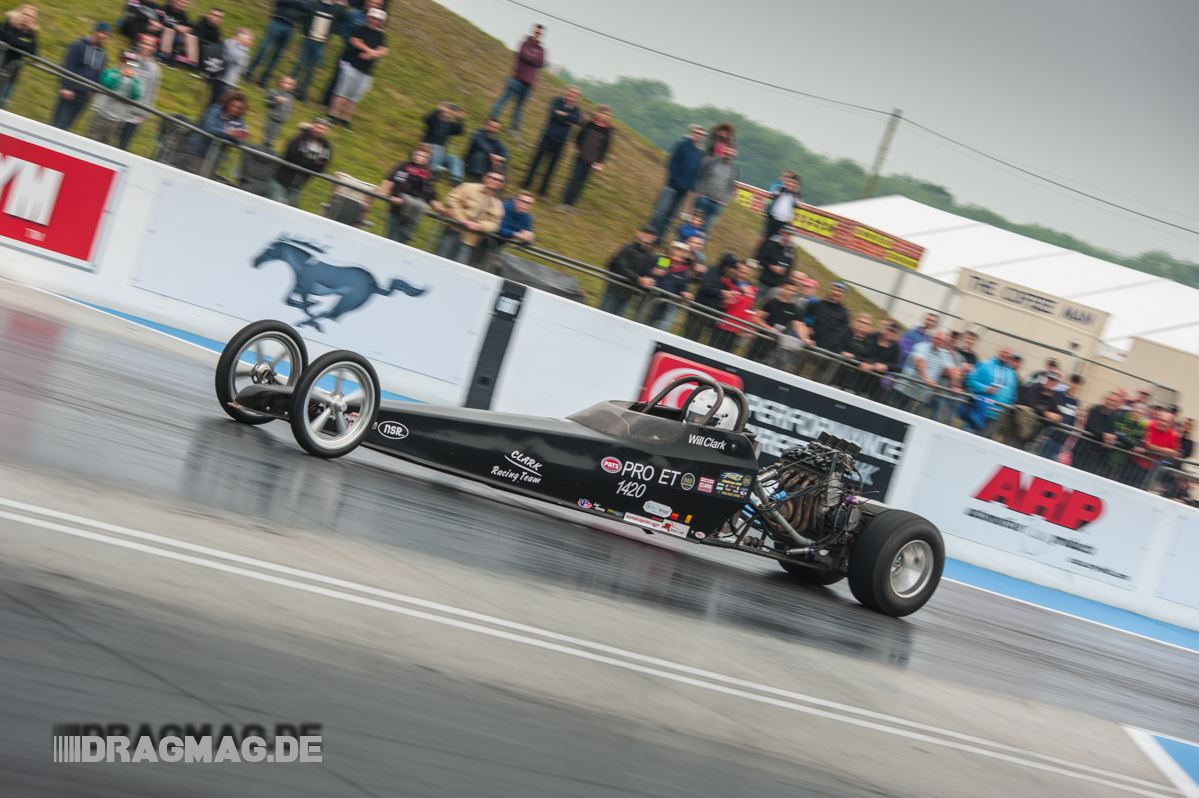 Round three - Janine stands against David Smith at the traffic lights and this time unfortunately had to leave the victory to the opponent.

We congratulate the winner Keith Herbert and Runner Up Paul Brown. 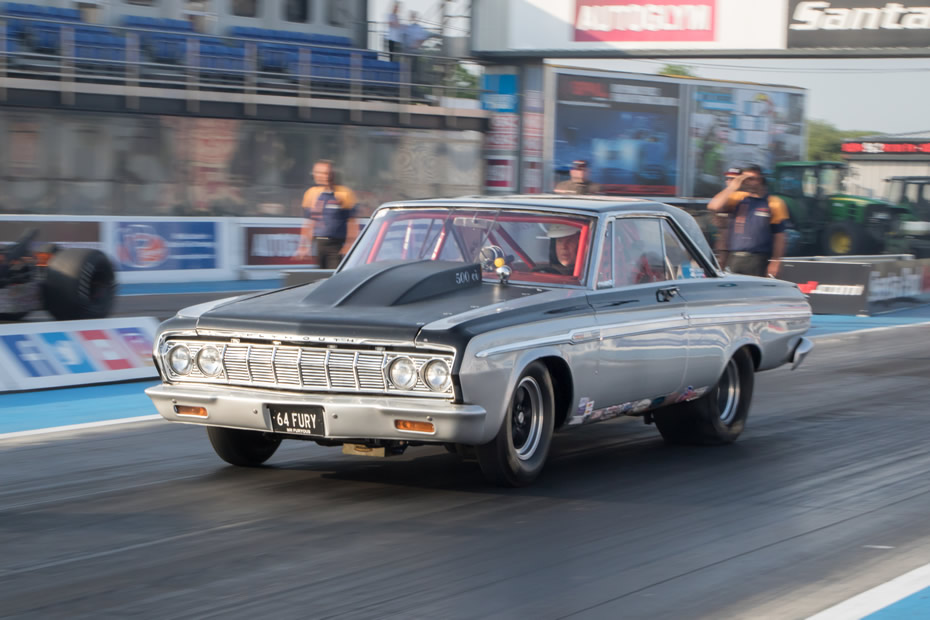 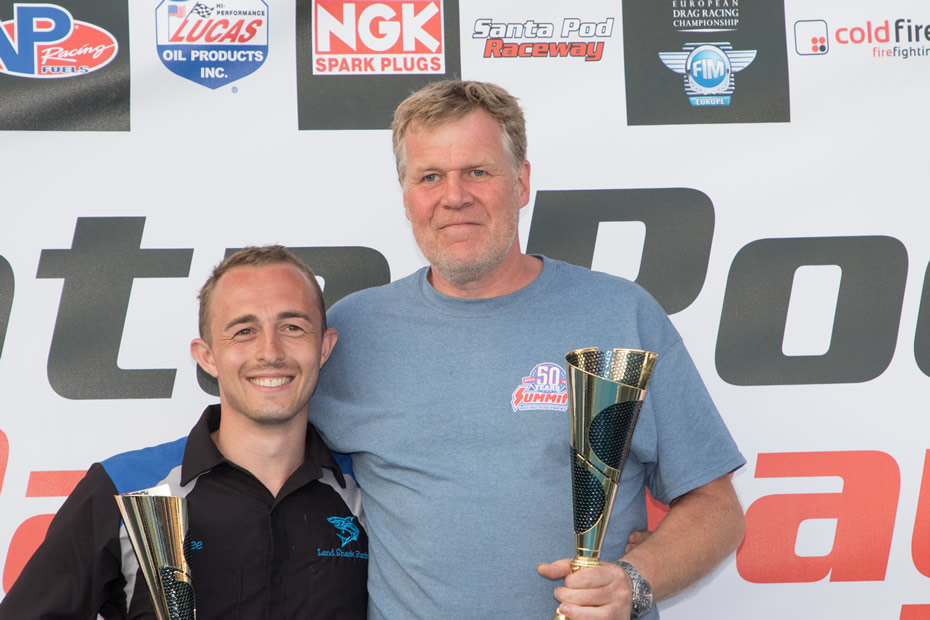 Super Pro ET
All the participants in the field were in the next round.
A 32er field is driven. Oliver Petzold prevails against Mick Howling. Jens Könnecke prevails against Daniel Giles. Marc Henney prevails against Scott Hauser, the reigning British champion and Billy Gane wins with a 0.007 seconds shot against Brad Jackson. Also Oliver Krautberger prevails in his first race in the class Super Pro ET against the Alternate Nowak from France. His real opponent Colin Millar has already failed due to a technical defect. So far, Krautberger drove in the class Pro ET, after some 8 second passes at the Doorslammers event and the test days in the week before, he decided to change the class and enroll for the SuPro challenge. 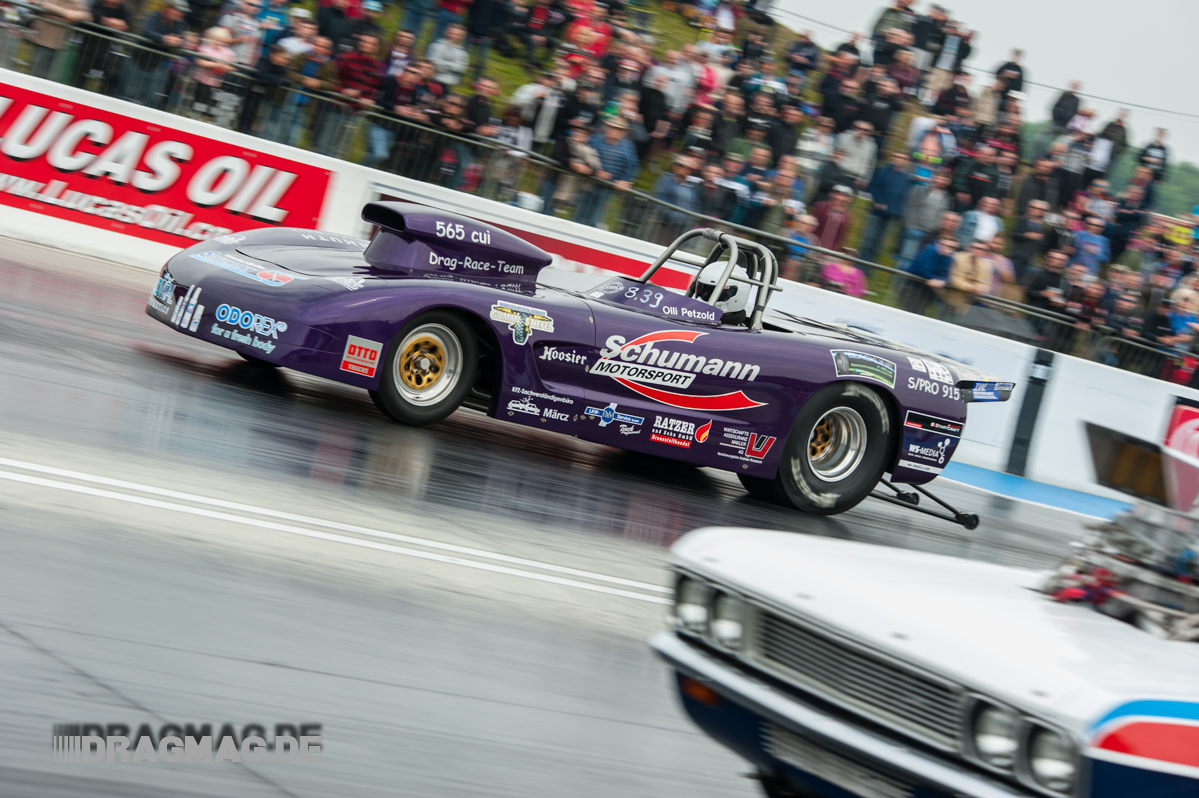 On lap two, on the damp, cool race Monday, it was just before 10:00 clock on the still cool and tricky track. Jens Könnecke had a very restless run. He stayed 3 tenths behind his normal performance and dropped out against David Evans (the later runner-up in Doomsday Impala). Marc Henney drives a red light. During the burnout, a Transbrake cable has come loose. When he presses the button at the christmas tree, he rolls forward, instead of waiting at high speed at the light for green. Marc would like to thank Jens Könnecke for the converter. Without him he would have been out much earlier. Oliver Krautberger is beaten by Laura Turburville at the light with a 0.001 second reaction (about 0.09 seconds), then on the track she does not give the run out of hand. Billy Gane loses to last year's Hockenheim winner Brian Pateman and is also eliminated. Oliver Petzold is the only survivor after this round. Billy Everitt in Alien Altered drives a red light, Oliver is in lap 3. 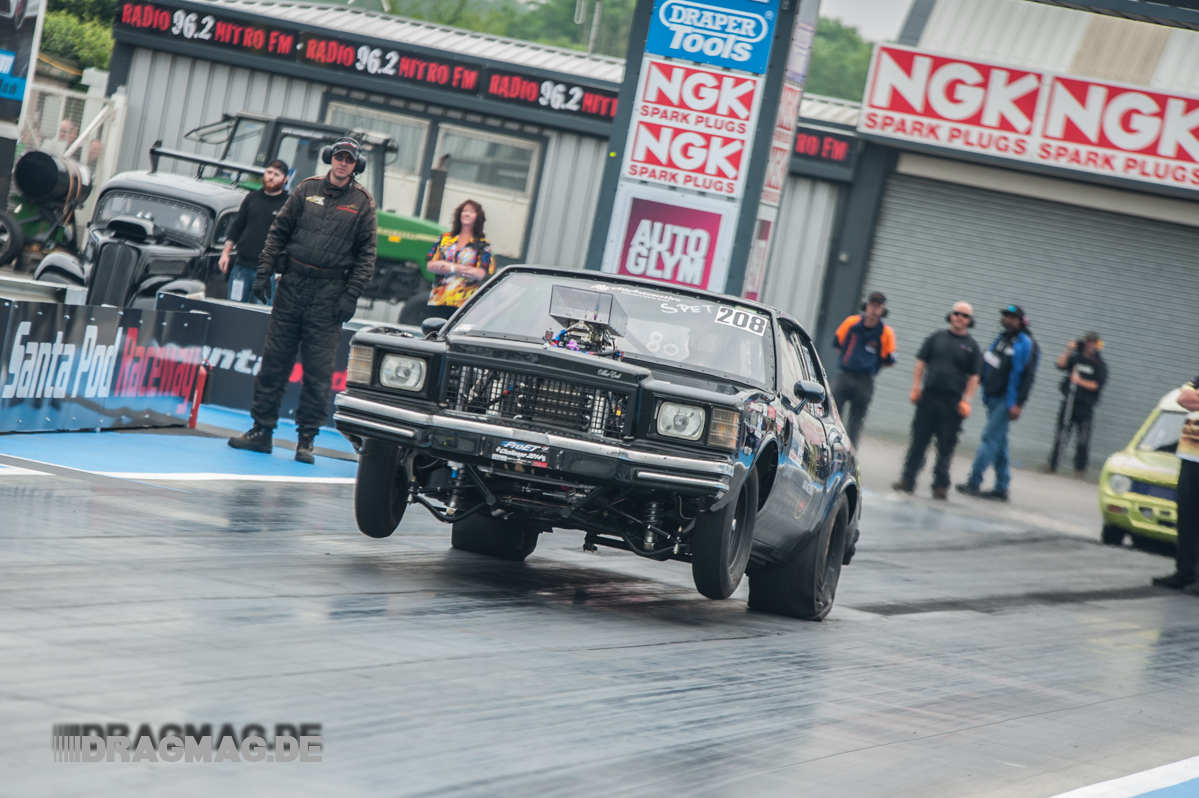 Round three is also for Oliver Petzold. The run of eventual winner Nick Good in the mighty supercharger Dragster is better at the traffic lights and on the track and so the Englishman is on. 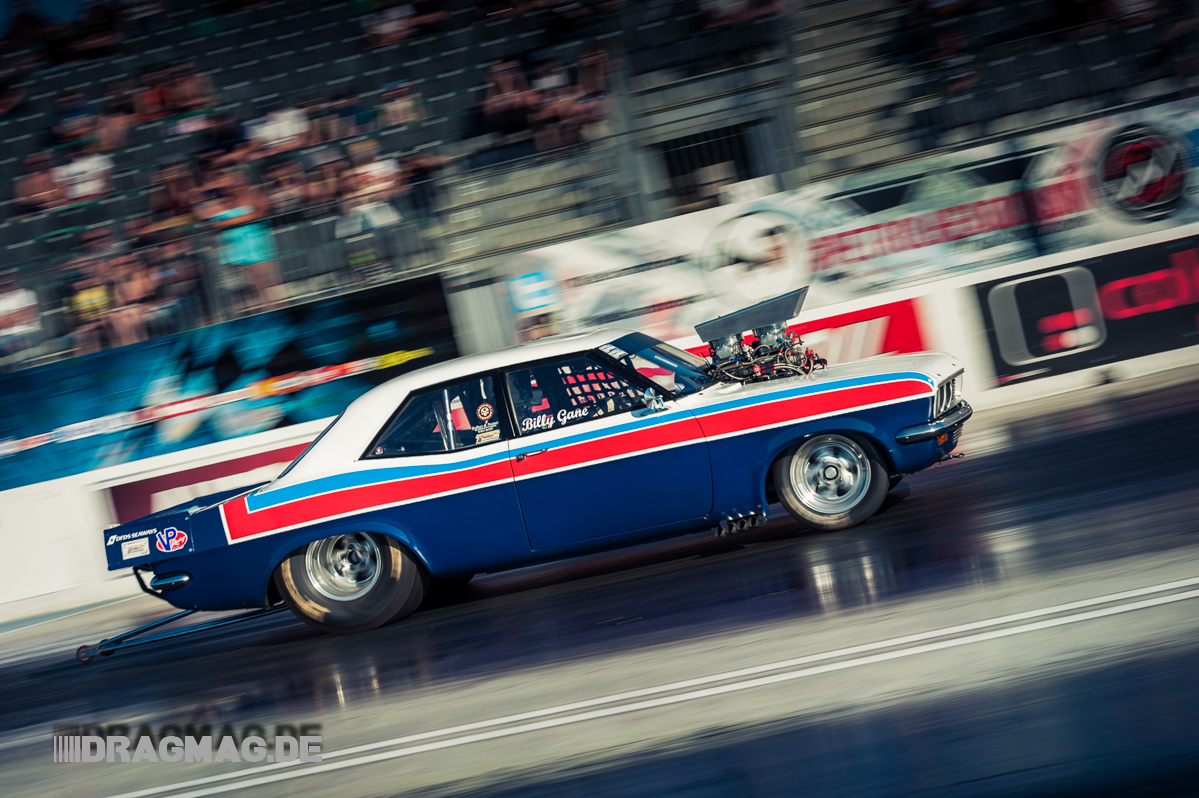 A very competitive field in which the challenge participants in both classes were good. The English were happy that the field was so international. All in all, it was a great weekend. The journey is very long, so respect for the mainland Europeans, who have come all the way to attend the Main Event.
You just have to see it once. Top prep track, professional organization, nice people, english weather (we were lucky).

Next Challenge Stop – Days of Thunder in Kiskunlachaza.
Do not forget to registrate!

Here is the elimination ladder ProET

Here is the points calculation ProET

And here is the actual Challenge Score ProET