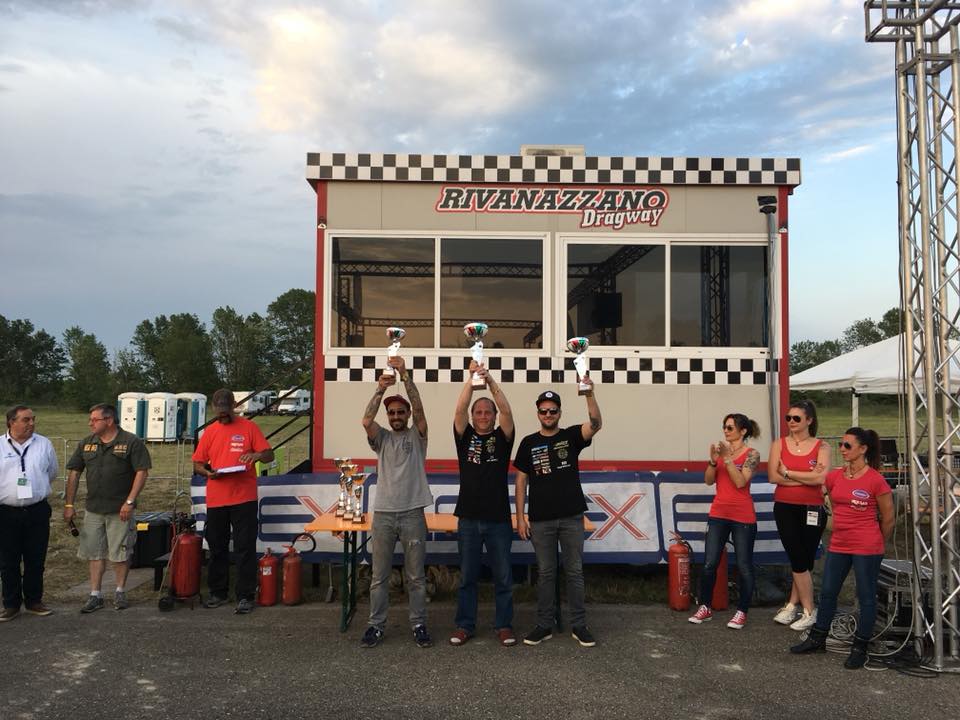 Round 1:
Mike "Mr Burnout" Bruckmüller has a Byerun because Sebastian Lajoux does not compete. In the "brother duel" Franz Aschenbrenner wins against Robert Gassner. Aschenbrenner did not finish the engine until the day of qualifying. Start-up well-built Hot Rod has no opponent, as Mr. Button can not compete. Edi Hildebrand, who is back on the track after a two-year break, this time in our class, loses against Patrick Dubois. Hildebrand with new PB after the weekend. Olli Petzold with Byerun, as Walle Strobel had to complain after the qualifying gearbox problems. Stefan Eisenhauer wins against Alain Dürr driving a red light. Bailo wins against Bonasso, who can not compete. Gerhard Dold came off the right track, it cost time, Fabio Cassinelli used this to victory. Christian Frei wins in the 50-year-old slingshot against Elodie Dubois (struggling with gearbox problems in her first race in Super Pro ET). Christian drives his very first 7 with the scrap iron in this run. Congratulation to Switzerland. Elodie's brother Fabien had a Byerun. Florian Uebel did not start because he was not sure if the engine had the right setup. He also drove in the quali a PB, his first 7, then he let it be good. Schlegel wins against Furani, Simon Rudiferia wins against Manuel Kreiter, the man from Bodensee. Marc Steinegger in the constant and fast Slingshot from Switzerland wins without a fight against Beat Rechsteiner, who also could not compete. Eric Mathis in red Bel Air turns red against Richiardi (in former Gerd Habermann / Tom Zellner / Bugwahn Dragster).

Round 2:
Aschenbrenner red light against Bruckmüller. Zulauf loses against Patrick Dubois and Oli Petzold wins with 0.002 seconds RT against Stefan Eisenhauer in a super-close duel. In the AMP duel, president against vice, Enrico Bailo prevails. Christian Frei redlight against Fabien Dubois, who burns in the red dragster 7.5 seconds after another on the track. Simon Rudiferia loses against Martin Schlegel. And Steinegger against Richiardi.

Round 3:
Bruckmüller has a scheduled Byerun. Oli Petzold draws against Patrick Dubois the short straw. And Fabien Dubois drives a breakout, so Enrico Bailo is on. Schlegel with red light against Steinegger.

In the final Mike Bruckmüller defeated the Italian Bailo. Congratulations to Switzerland on the victory, to the Italian for the lead in the Supro ET Challenge, and everyone else as a participant of a good race.

All in all, it was again a great event. The weather was kind, the grip excellent and the organization used to be professional.

Unfortunately, the event was overshadowed by the deadly accident on Friday in the exit area of ​​the volunteer helper of the fire department Vincenco. Our compassion goes to his family.
"Per Vincenzo"

Jonny Niesner for ProET
and
Markus Münch for SuPro ET

here for the point calculator ProET

and here to the current ranking ProET